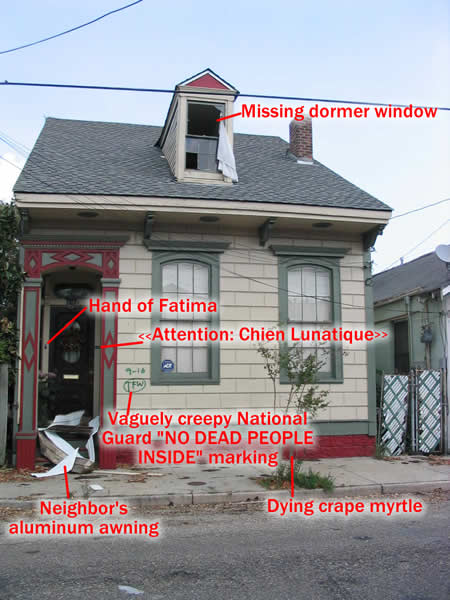 When I turn the corner, the house looks mostly as we left it. There are a couple of strips of weatherboard missing from the second floor, but they came off weeks ago when we were just starting the tropical storm alphabet, during Cindy. Most of the homes around me are fine, too. An awning torn off, a few tree limbs down. Nothing too big.

I get closer and see that our dormer window is gone. On the far side of our house, the neighbor’s 30-foot-tall loquat tree has fallen. It slid alongside our house on its way down, taking out the fence, a couple more sideboards, some windowpanes, and one complete window. The hand of Fatima is still hanging by the front door, though. So is the snooty French, “Attention: Chien Lunatique” sign. There’s a mark spraypainted on the front of the house, presumably by the National Guard. I can’t translate it entirely, but I think it means “No dead bodies inside.”

The door is heavy and swollen. That’s not surprising: midway through September, it’s still sweltering and very, very humid in New Orleans. I give the door a kick and breathe a sigh of relief: nothing’s changed. Glass on the floor from a shattered window, but otherwise, it’s okay.

There’s no smell of death in the air. I’m hopeful for Lola.

I get to the kitchen, and there are still two full bowls of cat food on the floor: the SPCA must’ve come early on and taken her away. I put my bag on the table and call around just to make sure. No answer. Great.

I open the door to the study and make my way to the back. It’s high noon, so there’s no light coming directly through the windows. It’s dark and stifling. Jonno made me a list of clothes and supplies. I just want to get them and get out.

I look around and see that there’s not much damage. Some more small trees and shrubs are down in my neighbor’s yard. A handful of my potted plants have died. I walk back to the kitchen to get my duffel bag and start packing.

Then I see her: a long, low lump stretched across a side table. I take a step toward her and call out “Lola?”, but she doesn’t respond.

The pieces quickly fall into place: during the storm, the door to the study slammed shut, trapping her in the back of the house for nearly three weeks, a few crucial feet away from bowls of food and a tap that’s still dripping. Lola’s eyes are slits, green and lifeless. I call her name again, stroke her back, but nothing.

Without thinking, I say, “I’m sorry.” I keep repeating it: “I’m sorry, I’m sorry, I’m sorry, I’m sorry.” I say it again and again as I walk back to the yard, and though the words stay the same, the inflection changes: now, I’m furious. I’m furious at the SPCA, the Humane Society, every organization I contacted one day after the storm and who’ve obviously been conducting rescues in the area. I’m furious with neighbors who could’ve checked on her. I’m furious with friends who could’ve gotten in. But of course, I’m most furious with myself. Lola is feisty and stubborn, and on the handful of occasions I’ve tried to put her in carriers, I’ve lost significant amounts of blood. In the rush of our evacuation, it was simpler to leave her behind in a well-stocked house. I never anticipated that something as simple as a tricky doorlatch, an inch-long piece of metal, would decide whether she lived or died.

I pick up a shovel and start to dig, but the ground is strangely hard. I’m sweating like a pig, maybe two or three of them. I grab a post-hole digger and try again. It’s no easier. I’m still repeating “I’m sorry, I’m sorry.” It gives me a focus, something to keep my mind occupied, something to keep me from feeling too sad and guilty just yet. I’m making no progress with the digging. It’s going to be a very shallow grave.

I hear a tiny clinking and a meager “meow.” The neighbor’s cats must’ve started using my water garden for drinking. I glance up, expecting to see the usual assortment of toms and black cats, and there’s Lola, standing in the back door, looking at me.

It’s one of those moments when I really, truly don’t believe my eyes. It’s like after someone’s died, you think you see them from the corner of your eye, but you turn your head and realize there’s no one there at all, or maybe it’s just a coat rack, or perhaps a passerby happens to have a gait similar to that of your mother or grandfather or best friend from college.

A full five seconds later, I rush over to Lola, pick her up, and bring her to the kitchen. I put her next to the running tap, but she’s not interested. Maybe the water smells contaminated to her, or maybe she’s been drinking from the toilet for the last 20 days. I place her on the ground by the food, and her mood changes. For the first time, I notice that she’s skeletal, and she’s clearly starving.

I leave her to eat while I start packing. Five minutes later, I’ve put her in the cat carrier I brought from Lafayette, and we’re out the door. I take her back to my office, where my coworkers and members of the National Guard (who have commandeered our offices, turning them into a temporary base of operations) peek in on her. I leave her in their hands and rush off to look in on other homes and pets. No luck with the outdoor cat at a friend-of-a-friend’s house. I leave her as much water as I can in an upturned trashcan lid and move on. I pass by another friend’s home and notice she’s lost a bit of her roof–nothing too big, but she’ll want to know. I take a picture and move on.

I arrive at my pal Jim’s house, which looks to be in very good shape. I see that the National Guard has come by his place, too; they spraypainted their mark on his sidewalk, which is more considerate than what they’ve done at mine, I suppose. Beside his door, there’s another mark–it says “SPCA” with a big “X” by it. Cool: they didn’t get my cat, but at least they got to Jim’s. I enter the house, just to make sure.

I call around, looking in all the hiding places I know she likes. Finally, I peek under the bed, and sure enough, there she is: curled up in a ball, hidden in the lining under the box spring. I prod her a bit, and she meows. After a bit, she slips to the floor, and I try to put her in a second carrier I’ve brought, but she’s shy and runs away. Ten minutes later, she runs behind the bathtub, and I know she’s not coming out. I open the three gallons of water sitting on the kitchen table and fill up every mixing bowl and saucepan I can find. I turn on the tap just a trickle (though his water isn’t running yet), crack open every can of cat food in the pantry, look in on her once more, lock up and go. She’s gotten by for several weeks on far less, and with power coming back on and people gradually returning, I’m hopeful she’ll do okay ’till I can get back again.

These are the high points of my day. The rest is a frustrating blur:

That was yesterday, and today, of course, I’m feeling guilty. There were so many other pets I could’ve helped if I’d planned better, if I’d known where to find them. I could’ve left water for the neighbor’s cats. I heard dogs barking, and I could’ve tracked them down, left them water, too. I think my neighbor’s dogs were still in the backyard–though there wasn’t a National Guard mark on their house or the sidewalk, leading me to believe that they might be among the 10,000 or so New Orleanians who are still be holding out. (It wouldn’t surprise me: they’re of hearty Cajun stock.) Even so, I missed dozens of opportunities.

I’m starting to think I need a vacation. 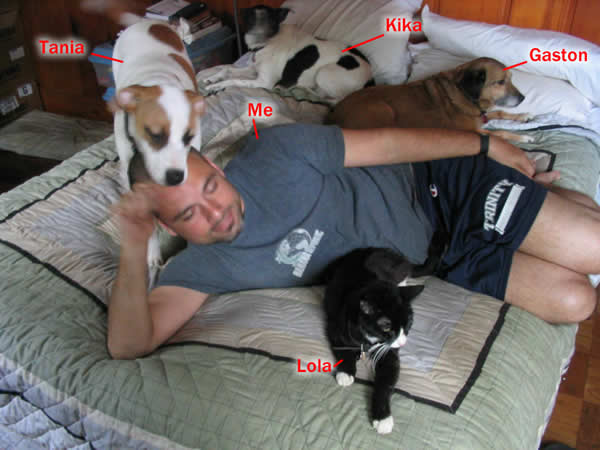