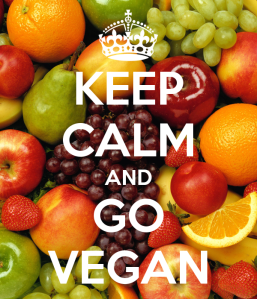 I am a patient man. My husband would say that I am too patient. It’s something I picked up from my mother, who preached the “This is Water” philosophy long before David Foster Wallace gave his now-famous speech.

I am also a pragmatist. This goes hand-in-hand with being patient.  I don’t need a perfect life, I don’t need laws, technology, jobs, clients, partners, or pets to be exactly as I want them, when I want them. I am willing to accept incremental progress and evolution rather than lickety-split revolution — in fact, I think slow-and-steady-wins-the-race is a healthier approach. In short: I am willing to live with the ambiguities and messiness of the world. My boyfriend can vouch for that.

So it’s no surprise that my version of veganism is fairly casual, laid-back. Don’t get me wrong: when I was younger and merely a vegetarian, I was very confrontational. I went through That Phase. I was a complete and utter dick to carnivores. I can smile about it now, but at the time, it was terrible.

When I returned to the meat-free fold a few years ago, determined to go full-on vegan, I decided to approach it in a different way. So far, I think it’s worked: I feel better about myself, I think I’m inflicting less harm on the animals of the world, I didn’t have to change my life too dramatically to make the switch, and just as importantly, I don’t believe I’ve alienated any friends or family members in the process. (Though like many non-meat-eaters, I still have a dad who says things like, “I know you’re a vegetarian, but you still eat chicken, right?”)

Along the way, I’ve persuaded a few folks to join me. Most worried that being vegan would be too much of a “lifestyle” and upend their daily routines, but soon they realized that’s not the case — not at all. Here are some of the tips I offered them, starting with the ones that are easiest to implement.

Going vegan can be a scary proposition. The minute that word gets out, folks will accuse you of being trendy or hypocritical or both. Or worse. Things can become very…unpleasant.

If you think you’re up for that, fine, knock yourself out. Most people I know don’t have the time or the energy for it. I suggest beginning the transition slowly and quietly by veganizing your wardrobe. It’s surprisingly simple to do, and I doubt anyone will even notice.

Obviously, you’ll have to ditch the leather belts, jackets, wallets, and shoes. Even if you keep your burgeoning veganism a deep, dark secret (as if it’s shameful to avoid causing other living beings pain), it’s hard to think of yourself as “cruelty-free” while still wearing the skin of an animal.

Technically speaking, you’ll want to ditch the wool and silk, too. It’s true that wool can be harvested humanely, but chances are, the stuff in your wardrobe wasn’t. And silk requires the killing of silkworms. Being vegan means treating all animals with compassion, even worms and bugs. (Cockroaches, too. I don’t always abide by that, though.)

Thankfully, there’s an abundance of cotton in the world, not to mention man-made fabric. Check your closets and I’m guessing that 90% of your shirts, pants, hoodies, sweatshirts, socks, and underwear are animal-free. Jeans can be tricky because of the patches along the beltline, but the most common brands like Levis rarely if ever use leather anymore, opting instead for “leather like construction paper”.

By far, the hardest things to replace will be your shoes. I’m fortunate that I can wear sneakers to work, and if you’re in a similar situation, that’s great, because you’ll have plenty to choose from. My favorite brand is the Onitsuka Tiger by Asics Ultimate 81. They look great, they come in a range of colors, they can handle loads of abuse, and they’re frequently on sale. In warmer months, I also wear shoes from Native, which are advertised as “beast-free”. (I used to prefer Saucony’s Bullet Vegan because they’re nice and surprisingly comfy; unfortunately, they don’t hold up well over time.)

As with anything, do your homework. Some shoes — like the nearly-ubiquitous Chuck Taylor All-Star — look vegan, but they’re made with glue derived from animals.

Choices are more limited when it comes to dress shoes, but there seem to be a few more options every week. (Just be sure to read reviews before you buy: vegan dress shoes can still be expensive and crappy.) Between the broadening array of faux-leather and faux-suede gear and America’s increasingly casual workplaces, you should be able to find something to put on your feet from 9-to-5.

Belts and wallets can be trouble spots, too. I suggest sticking with web belts whenever possible: they’re cheap, and they come in a huge array of colors and styles. For wallets, I’m devoted to BigSkinny. I bought one of their basic bi-folds several years ago, and it’s still going strong. As an added bonus, it’s extremely lightweight and it can fit in my front pocket, which (a) keeps my cash safe and (b) keeps me free of back pain. (Ask any chiropractor, and they’ll tell you: men who sit on fat wallets all day long make up a significant number of their patients. I used to be one of them.)

Like I said, though, I’m a pragmatic, casual vegan. Ultimately, I’m trying to reduce animal suffering in the world. If I have to pull out my one pair of leather shoes a few times a year — mostly for weddings or Carnival balls — so be it. As long as I use them sparingly, chances are, they’ll last me for several decades, meaning I won’t have to purchase a new pair of flesh-derived foot-coverings or spend even more moolah on man-made alternatives. Bottom line: those leather shoes are already in my closet. They’re not causing any more pain.

I feel the same way about secondhand items. If you need leather, wool, and silk goods for work, buying them from a thrift store — hopefully one that’s LGBT-friendly, rather than, say, Salvation Army — keeps you out of the first-line loop of cruelty.

Of course, you could argue that wearing leather at all, no matter where it comes from, fuels leather’s desirability and indirectly contributes to cruelty. We could follow a billion theories like that down a billion different crazy-making rabbit holes. Let’s just accept that no solution is perfect.

Next up, veganizing your cosmetics and toiletries…

2 thoughts on “I’m A Casual Vegan (And So Can You!) Part One: Clothing & Accessories”