Sebastian, then and now

We’ll never know the real story of Sebastian’s first few months. All we know for certain is that he was found on the side of a road in New Orleans’ Lower Ninth Ward, unconscious, dehydrated, and debilitated by disease.

Under normal circumstances, we might guess that he escaped from someone’s back yard. But Sebastian is deaf, and that opens up the far crueler likelihood that he was abandoned.

Pit bulls are popular dogs in New Orleans. Breeders often use the pit bull’s unwarranted reputation for aggression to sell them for fighting and protection. It’s a reasonable guess that Sebastian was born to a breeder, and if all had gone according to plan, he might’ve spent much of his life in a cage — or worse.

And that, I think, is how Sebastian wound up on the streets. Like many handicapped animals — including humans throughout the ages — Sebastian, was rejected and left to die.

That’s all conjecture, though. All we know for certain is that Sebastian wasn’t willing to go down without a fight. We also know that the person who found him had heard of Ken Foster. Through his Sula Foundation, Ken treated Sebastian’s various ills, made him whole again, and then Ken began looking for folks who could provide a good home for the young pup.

John, Peter, and I fit the bill. 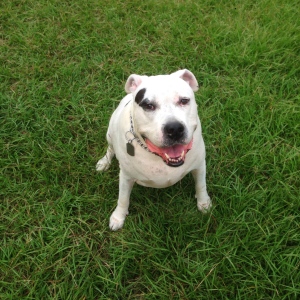 Three years earlier, Ken had encouraged us to adopt another deaf pit bull, whom we named Jacques. Jacques was easy to train (he’s great with sign language), very calm, and super submissive to other dogs. He also weighs about 120 pounds. He’s like a giant, slobbery teddy bear, come to life.

So, when Ken asked if we’d like to adopt a second deaf pit bull, we asked, “Where do we sign?”

When Sebastian crossed the Industrial Canal and came to our home in the Upper Ninth Ward, he was still a little sick, a little underweight, and very shy. But he was also playful and extremely energetic. That was great in some ways, but when it came to making him stop long enough to understand sign language, it was challenging at times. Honestly, it still is. (Though Peter seems to have more luck on that front that John and I do.)

At about two-and-a-half years old, Sebastian still has plenty of puppy left in him. He’s still rambunctious. Like many abandoned dogs, he’s still territorial and possessive of his food. And it’s safe to say, if our furniture could talk, it would have a litany of complaints.

But Sebastian is loved, and he gives plenty of love in return. He’s jealous, sure, but he’s safe, and he’s comfortable, and so far as we can tell, he’s happy. And that makes us happy.

As a funny side-note, yesterday, I took the hounds to the local dog park and let them romp around. At one point, Sebastian was rough-housing very close to a senior dog, and I tried to get his attention, calling him by name. (Not that he’d hear it, obviously.)

Another woman at the park heard me, and said, “Is that Sebastian? Oh my god! He’s famous!” I laughed because I had no idea. Ken first contacted John about Sebastian. I don’t think I ever received an email or a Facebook message with links to the pup’s sad story. I just got second-hand reports.

Based on what the woman said, though, I got a little curious. So, I went to the Sula Foundation’s Facebook page and searched for mentions of Sebastian. There were dozens — not just posts from the Foundation itself, but also posts from many, many pet-lovers who’d contributed to Sebastian’s recovery. I had no idea.

So now, two years later, I’d like to offer my belated gratitude to everyone who pitched in to pay for Sebastian’s treatment. You’ve done something very special for our family. You should at least know that in return.

Thank you. I hope to repay the favor someday.