This doesn’t feel great. The streets are barren, the weather is far too cold, and the costume is from last year. But I’m doing it, for a few hours anyway—partly to show off the magnificent hat and mask that my sister @grandedame sent me, and partly just to do it, because it must be done. #nola #mardigras #mardigras2021 #covid_19 #covidcarnival #neworleans 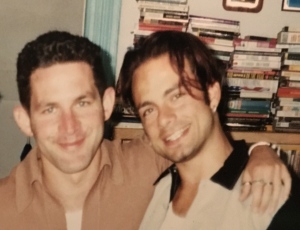 Full disclosure: I’ve known Martin Pousson for a long, long time. Decades, in fact. It can be a little awkward having artists as friends: will I like their new work? What will I say if I don’t? Thankfully, that’s never been a problem with Martin. He’s a master of language and a magnificent storyteller.

In some ways, Martin and I had similar upbringings. Our parents came from humble, country backgrounds. Our mothers strove to give us the best of everything: clothes, toys, an education, far more than they’d had growing up. Our fathers worked day and night to meet our mothers’ demands, and as a result, they figured less into our lives.

But Martin’s mother was ambitious in the extreme. In his writing, she’s always pushing, nagging, coddling, scolding, concerned about appearances and keeping up. (She reminds me a little of Rebecca Wells’ mom in Divine Secrets of the Ya-Ya Sisterhood, but so, so much crazier. And more real.) Not surprisingly, his mother figures prominently in his first novel/memoir, No Place, Louisiana, and in his second, Black Sheep Boy.

You might wonder how someone could wring two memoirs out of one childhood, but in Martin’s case, there’s plenty of material to explore, and there’s astonishingly little overlap between the books.

No Place, Louisiana is the fairly straightforward story of Martin’s childhood. I’d describe it as creative nonfiction: a real-life, start-to-finish story laid out in stunning prose.

Black Sheep Boy is told through vignettes, 15 stories of events that took place over the first 20-ish years of Martin’s life. They unfold, unravel, dip, and climb through chapters, paragraphs, and sentences comprised of pure poetry.

Put another way: in No Place, Louisiana, Martin goes from Point A to Point B to Point C, connecting the dots of his own story. In Black Sheep Boy, the connecting lines disappear, and Martin dives deep into the dots themselves, exploring and explaining how he’s come to be who he’s come to be.

As such, Black Sheep Boy doesn’t have a conventional plot; Martin himself is the throughline. Each chapter brings its own story, its own mesmerizing turns of phrase, its own climaxes — sometimes literally. It’s a magnificent read for anyone, but for this gay man of a certain age, it wasn’t just beautiful, it was a look at part of my own life.